David Foster Wallace and Chicago: My look back

When I lived in Kentucky [1] in 2003, Facebook was not yet a thing. The analog-Windows-bookstore world that peaked in 2004 [2] was still ascending, enough so that my discovery of Wallace started with a SPIN article about The Strokes, the heavily hyped NYC band. I read it most of the way and then realized that I had seen their video [3], on Fuse in late 2001, from a couch in grandfather’s house, which had been converted to a live-in medical facility replete with oxygen tank next to the oil lamp.

“Last nite she said…” and so on. I didn’t love it and felt somehow wronged that so many magazine writers felt otherwise.  So i began researching The Strokes backlash, querying Google – still just 10 blue links  [4] – for “Strokes bad” and so on. Finally, I found a post on the obscure Last Plane to Jakarta, a pioneering blog maintained by John Darnielle of the Mountain Goats. His fake pre-review of The Strokes’ then-unreleased sophomore album waffled between light-heartedness (tuba solos!) and vague despair at the state of the indie music scene [5] (Gregg Allman as an arbiter of indie cred!). It was the crowning achievement of a weird moment in rock criticism.

Going through LPTJ’s archives, I found many of the artists and works that would become touchstones for me in the coming years. There was The Stockholm Monsters’ Alma Mater [6], which Darnielle labeled as the best album ever, a judgment I can almost agree to. And then, even better, his extraordinary footnoted think piece [7] on the future of rock, in which he asked “Has the editor been reading too much David Foster Wallace?”

Looking up Wallace on early 2000s Google took me to Amazon, where I saw Infinite Jest. My mom called me when she and my sister were at a Borders in Louisville, KY, asking if they could pick up anything for me. Sure, I said, Infinite Jest by David Foster Wallace. They did so and then I started reading it. To this day I have not finished it (really have not even come close).

Wallace receded into the background when I was in Rhode Island for college. Those years were counterintuitively lean, intellectually – though I was an English and Classics major, it felt like I read less than ever before. There were infinite conversations about theory, and plenty of terrible Toni Morrison novels to read, but the love of reading that I had felt during high school and middle school seemed to be on hiatus. 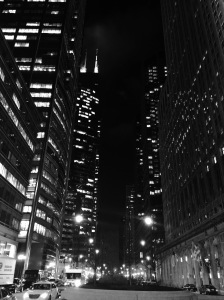 Rudderless after graduation in May 2008, I set out for Chicago to complete a short, one-year MA program, as a stopgap while I figured out what to do. I moved into my apartment in Hyde Park on Sept. 5, 2008. One week later, Wallace hung himself – a story I read on the NY Times website, from the last desktop computer I ever owned (I held on to it for four more never ending years as I couldn’t afford to buy anything new). When my mom called me again, I picked up my Motorola RAZR (the smartphone revolution was just underway in late 2008, but I was years away from converting) and told her about his suicide.

Suicide had been a background pressure for me for years. I knew it existed and that it was an option for the severely depressed. But its physicality – e.g., Wallace’s hanging – had not lingered in my thoughts as a counterpoint to airy imagination. I had thought of suicide as an abstract ideal during my first months in college, back in 2004 [8]. Then it went on hold, only for its deathly call-line operator to get back to me four years later, after I was finished and all moved in for grad school. Wallace was back too.

I had mom ship me that copy of Infinite Jest she and my sister had picked up for me years ago. I started to read it again, though again I couldn’t get far – this time not because of growing academic obligations as in high school, but because I soon found myself without a job after my program ended, and I had so little margin for error that it felt like I couldn’t afford to read.

I read bits and parts, though, like the passage about feeling like “shoes in a dryer” that I read on a Jackson Park Express bus from the loop to Hyde Park in late summer 2009, while I was with Marvin. That description of anxiety made my mom laugh when I recited it to her on the phone, but it created real uneasiness for me as I faced the job and apartment hunts ahead.

The rest of 2009 and 2010 were a mess of life-footnotes [9] – rejection letters, weight gains/losses, daily annoyances with insects and rodents, declining and recovering health that luckily only afflicted me at a prime age. These constant minor anxieties, put together in a large web, set me up perfectly by the time that the Pale King arrived in 2011, after I had just soldiered through an adjunct teaching position [10]. It was the last book I ever bought at Borders, at a time when I had hardly a dime to spend.

Unlike Infinite Jest, I actually finished the Pale King. I read it in Starbucks around Chicago while using free Wi-Fi to search for jobs. I remember reading a gorgeous passage while at the counter at the Irving Park Rd./Kostner Starbucks. I recall going through the suicide description near the book’s end while passing the Addison Blue Line station. The book was materially Chicago for me, in addition to actually being about Chicago and Illinois! The description of a character’s long walk to an IRS hub in the snow, the bus rides to Peoria, etc. – the book was my life during the on-edge moments of 2011.

Though it was “unfinished,” The Pale King has always been my favorite Wallace novel. I’m biased, yes. And if someone who hadn’t accrued such a reputation prior to a shocking suicide had turned in the collection of fragments that was The Pale King, it would have been insignificant, dismissed. It has such accidental realism and relevance though, for anyone who was young and confused like I was during the aftermath of the Great Recession. The chapters that go on forever and get finished, followed by the short nonsensical chapters – I like how that interplay corresponded to nonsense in real life, like pouring unbelievable effort and length into a cover letter, only to get a short curt “I didn’t read this” reply.

With all the “corny timing of real life,” as Salman Rushdie put it in The Satanic Verses [11], I got my first real job not long after I finished The Pale King. Wallace faded from memory again, although I used the book jacket as an avatar on an online Yu-Gi-Oh! forum and occasionally recommended the novel itself over Infinite Jest.

More years, more jobs, less time. Wallace seemed confined to the new red Ikea bookshelves I had set up in my place now that I could afford them. Would I have survived if I hadn’t had that respite from The Pale King, which Marvin had pointed out to me at the books display in the front of that Borders on Randolph and State (now an Old Navy)? I start crying like an idiot thinking about the jobless days when I somehow pressed on, reading about the monotony of the IRS, seeing the other extreme of the working life and wondering if my search was even worth it if I could just scrape by [12].

Finally Marvin, rescued from undocumented status and a caregiving job, became a flight attendant, while I became what I had always wanted to be while thinking of Wallace on and off in the 2000s – a writer with some control over my destiny, at least, perceived control. Suicide, though? It had been banished in the wake of finishing The Pale King and moving on and getting a job. I had the thought under control. Until it came back at the peak of success, right when I had negotiated a remote work arrangement as I looked to split my time between Chicago and NYC.

I felt so desperate and ragged, trying to adjust to the new life [13]. Enter The Broom of the System, perhaps Wallace’s most overlooked work. I haven’t started reading it yet, but it is already one of my favorite books ever due to this dedication:

No matter what happens, this book will be one of the most important inanimate objects to me for the rest of my life. Someday, I’ll know it with that physical muscle memory that I already know The Pale King with – that easy, tangible recall that I think makes traditional books still better UX than ebooks.

It’ll be a path past boredom, since I’ll always remember him giving it to me in that tiny Manhattan apartment my brother lived in, at a time when our lives were going in contrary directions, together. It’ll be the bridge between Chicago and NYC for me. Apropos, since The Pale King, so intertwined with Chicago on both the micro and macro levels for me, was the last real Wallace novel, and now it’s like I’ve been looped back to the beginning of his oeuvre, to read his first full-fledged work. I’ve gone back in time to leave Chicago, and I never thought time travel could be this bittersweet.

[1] Lebanon, a tiny little town of about 6,000. Eighty minutes from Louisville, and a hop from the Maker’s Mark distillery.

[3] The Replacements once titled an album Let It Be. I should have called this post Consider the Lobster.

[4] Google used to be like a Unix shell. That was why it was so cool in the early years.

[5] A sample:  “The rush-rush of the ride cymbal recalls the Allman Brothers at their most transcendent, and the slithering guitar-lines wed Hendrix to Malkmus and come out sounding both tortured and cruel. Any person who doesn’t make the classic air-guitar face during the song’s closing three-guitars-trading-off solo should be considered suspect and potentially dangerous. There is just too much soul in here for anyone not to hear it. ” Read the whole thing.

[6] It’s a nice multi-paged exegesis on an obscure musical work.

[10] I do not recommend this line of work if you can avoid it.

[11] It’s one of the funniest parts of the book: “‘Curtains,’ she thought; but her car swung and skidded out of the path of the juggernaut, slewing right across all three lanes of the motorway, all of them miraculously empty, and coming to rest with less of a thump than one might have expected against the crash barrier at the edge of the hard shoulder, after spinning through a further one hundred and eighty degrees to face, once again, into the west, where with all the corny timing of real life, the sun was breaking up the storm.”

[12] At the time, the prospect of inane declarations of “I’m too busy” felt more appealing than making a few hundred dollars a month.

[13] “New Life” is also a great Signalrunners track that I associate with my first winter in Chicago. I couldn’t find a link to it at the time of this writing, though.