5 Tips for Getting Started with Chrome OS

Chrome OS appears to be a hit, thanks to Acer’s workhorse $199 C7 Chromebook and Samsung’s sleek $249 model. Chromebooks are often construed as “companion” devices, meant to supplement a Mac or Windows laptop/desktop, but in my experience they feel more like companions to a tablet/phone. Their modest power, stripped-down OS, and rich ecosystems make them much like a traditional computer influxed with cutting-edge mobile-informed software.

That said, transitioning from a traditional Mac/Windows machine to a Chromebook can be jarring. After all, you can’t install any native apps, and you have to run nearly everything thru the Web browser, all the while being conscious of the machine’s limited power. Here are some tips for getting started:

The variety of Chromebook models is diversifying, with both Lenovo and HP now getting into the game. The trend is sure to accelerate now that OEMs seem increasingly skeptical of Windows 8.

The $249 Samsung Chromebook is currently the best value on the market. It has a sleek, much-more-expensive-than-it-looks body, and it runs totally silent and cool. Its custom ARM processor is power-efficient and gives you up to seven hours of battery life. It can also support a 3G connection. It escapes the cheap netbook look that plagues the Acer C7 and it’s lighter and better performing that the heavier Samsung 550. While HP’s Pavilion Chromebook is still to be released, its heavy body (replete with Ethernet port) and power-hungry Intel processor don’t inspire confidence.

While wifi is more than enough for more uses of the Chromebook – I enjoy playing Pandora One while cooking or exercising, or using it while watching TV -, power users may also want to think about an Ethernet-to-USB dongle for the Samsung Chromebook, which doesn’t have a native Ethernet port. The cabled connection is great for more intensive productivity tasks, such as using Google Drive/Docs or uploading/editing photos, since it gives a nice speed boost to the machine’s modest guts.

While Chrome OS only runs Web apps (with the exception of the browser itself and the file manager), it still offers a comforting desktop metaphor that makes launching apps easy. Filling the dock with icons gives you quick access to full Web apps like Evernote or Tweetdeck, or to your favorite sties, such as the New York Times (optimized for Chrome) or Phandroid.

4. Use the Search key 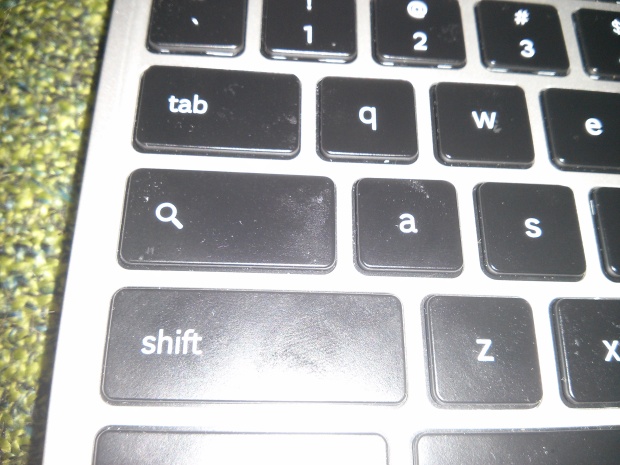 Chromebooks feature a novel Search key which is a great productivity enhancer. It searches all apps and files on your machine, in addition to a standard Google search.

5. Find equivalents for your Mac/PC apps – they’re out there

I often hear that Chromebooks “can’t do anything” and aren’t serious laptops. This may be true if you’re a hardcore gamer or Wall Street analyst, but otherwise a Chromebook can do almost anything a casual user or student might need to, using apps from the rich Chrome Web Store:

Photos and Images – PicMonkey is a nice lightweight photo editor, while Bomomo is an excellent drawing app.

Music – Pandora and Google Play Music both run flawlessly in the browser (and can be stored in the dock), and things should get even better soon once Spotify pushes out its Web app.

Video – Hulu, Internet TV, and YouTube are some of the choice options here.