For nearly a decade, I have been keeping a Top 10 favorite albums list. It started in a Word document in my Grad Center dorm room at Brown in 2005 and has since made its way into Google Docs and most recently into the OS X/iOS Notes app. I once even found a sheet of paper in a philosophy book – missing since 2006 – with a handwritten list on it. The most surprising thing was that not a single album on the list would have made the top 10 I would have come up with at that moment of re-discovery.

The sad part of my list making activities is that it wasn’t until late 2014 that I actually started doing version control, i.e., keeping and labeling old lists for reference to see how my tastes had changed. That artifact from that philosophy encyclopedia was a rare specimen into the time when I loved Electric Wizard and Nas, neither of which I would probably listen to today. But even so, the albums I once so loved by these artists – “Dopethrone” and “Illmatic,” respectively – are worthy of writing that explores my feelings for them.

Anyway: I made up my most recent list a few days ago, and as a project I’ll be writing long entries on all of its item, in random order. Let’s start with “Sung Tongs” by Animal Collective. 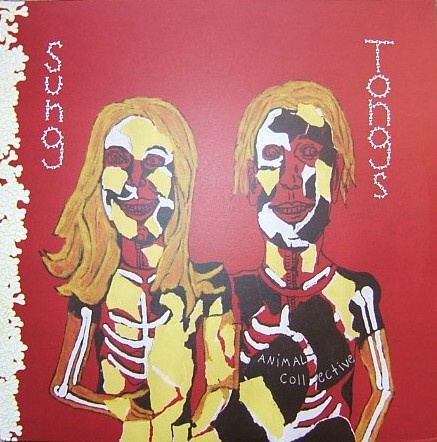 What does winter break sound like? That time when you come home from college, perhaps for the first time ever, after having never left home for your previous 17 or 18 summers and early autumns? Does it crunch with the sound of snow being pushed around by your shoe, making vain heated friction against the ice underneath? Is it a lonely listening experience as you walk to the cab, go through airport security alone with your headphones in your pocket? Or is it filled with the momentary cheers of seeing old friends at home, all of them imperceptibly older but changed by college? The winter break is a break in the new persona being created in college – that first break especially, since the heat of high school vintage youth can still melt the new snow and ice accumulating over your person.

“Sung Tongs” is the soundtrack to sleeping on the top bunk of a childhood bed that now seems so low to the ground and small. It’s the music that fills the empty room of large echoey hardwood-floored homes that can barely fend off the deep freeze across the neighborhood. It’s the sound of old assignments popping up in your memory, alongside the nonsense phrases written on first drafts of term papers to get off the ground early in the morning (or late at night, on the eve of a due date). “Who could win a rabbit/Rabbit or habit”? It’s the type of question that a sleep-craving ur-zombie thinks of, unable to put an adult stamp on things just yet despite being in the “real world” now.

This album came out in 2004, the year I finished high school and began college. I discovered it through a list on Pitchfork.com, a music website that I had been reading daily since 2002 and that left an indelible mark on the way I evaluated and wrote about music. Hell, this intro; it’s what Pitchfork thrived at 10+ years ago. I purchased it at Ear-X-Tacy in Louisville, Kentucky, in early 2005. I had gone to the store for the first time roughly a year earlier. I remember reading a newspaper in the car on our way back from that first time – the top story was John Kerry winning the Iowa Caucuses. The ambience of the Sung Tongs purchase is hazier to me, but that’s fine for an album that is so immaterial.

Other than opener “Leaf House” and the aforementioned (one of my favorite words as a teenager writing American History papers) “Who Could Win a Rabbit?” the songs on “Sung Tongs” are more like tone poems or washes of sound. They’re sort of like Brian Eno or Aphex Twin rearranged for acoustic guitars and pseudo-childish voices. Paces changes abruptly in some songs (“Winters Love”) making you think a new track has begun when the same one is just still going. There’s the endless “Visiting Friends,” which is my favorite writing music, just a bunch of strumming and humming. But there’s also the brief “College,” which says “You don’t have to go to college.”

Four-year college – something that is objectively expensive beyond the means of many U.S. families – has become the expectation of any graduating high school senior. I’m not sure that this is a good thing; some individuals are not equipped for postsecondary school, and they get along OK without it. But life without college for me is like imagining my life on Mars. Had I not gone, had I given up on a dark day in late 2005 after I freaked out about a Greek history paper that I could today probably write in an hour, had I not recovered so quickly from a devastating bout of mononucleosis – I might have gotten lost in the background faux-Greek choruses of “Sung Tongs,” my complaints and immaturity filtered, treated, and remastered to be among the a ton of contrarian voices fading away always from the protagonist – i.e., the listener – on that album.