Voyages to the Moon

Sometime back in the early 1990s, I saw the moon through a telescope my uncle had set up in a shed, out in an open expanse of land on our family’s Kentucky farm. In a place so isolated and far away from large cities, I was able to see the same body that had inspired H.G. Wells and George Méliès around the turn of the 20th century. Yellowy and cheese-like through the lens, the close-up view of the moon’s surface made me feel like I was not only looking ahead at the final frontier of space but also staring at of the most reliable muses of past.

The First Men in the Moon
Late last year, I read Wells’ “The First Men in the Moon,” published in 1901. Two men reach the moon after creating a new compound that can counteract the effects of gravity. Eventually, they are separated, but not before they discover some of the oddities of the lunar world: abundant gold (“I resumed my destruction of the fungi. Then suddenly I saw something that struck me even then. “Cavor,” I said, “these chains are of gold!”), mooncalves (“They seemed monsters of mere fatness, clumsy and overwhelmed to a degree that would make a Smithfield ox seem a model of agility”), and a much better view of the stars (“The stars we see on earth are the mere scattered survivors that penetrate our misty atmosphere. But now at last I could realise the meaning of the hosts of heaven!”)

Wells’ story is by turns funny and horrifying, and always page-turningly irresistible. What struck me was how the moon seemed in a way like the opposite of the imperialistic industrial societies, from the British Empire to the United States, that were coming to a head during Wells’ time. The Selenites (moon people) are amazed at the warlike tendencies of earthlings and seemingly blessed by an abundance of natural resources that are not the subject of a hyper-competitive land grab, a la what was occurring in the 19th century on earth with the rush for Africa. There are signs, though, of creeping earth-ism, if you will, on the moon, such as in the industrial mooncalf processing plant beneath moon’s surface, echoing the coal mines and factories of the age. 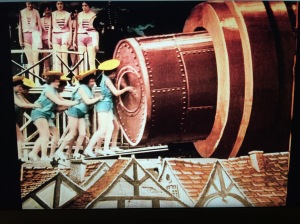 The Moon’s otherness ultimately leads Bedford (one of the main characters) to question his entire perspective, in a sublime chapter called “Mr. Bedford in Infinite Space.” Whereas treatment of aliens and their cultures – especially in sci-fi – are often just reimaginings of human affairs (the beings are vaguely humanoid and given whatever qualities the artists think are quintessentially human), Wells’ character meditation synthesizes all that’s different about life on the moon – the gravity, the atmosphere, the lack of hoopla around material commodities – and wonders if perhaps it is his world, his baselines for ‘normal,’ that are up for grabs and subject to artistic moulding:

“At last I felt my moonward start was sufficient. I shut out the sight of the moon from my eyes, and in a state of mind that was, I now recall, incredibly free from anxiety or any distressful quality, I sat down to begin a vigil in that little speck of matter in infinite space that would last until I should strike the earth … But in that direction no light was forthcoming, though the strangest fancies came drifting into my brain, queer remote suspicions, like shadows seen from away. Do you know, I had a sort of idea that really I was something quite outside not only the world, but all worlds, and out of space and time, and that this poor Bedford was just a peephole through which I looked at life?”

Le Voyage dans la Lune
A year after Wells published “The First Men in the Moon,” French filmmaker Georges Méliès made his silent film, “Le Voyage dans la Lune” (“A Voyage to the Moon”). Though a 113 year-old silent film, it has both black-and-white and color versions and runs between 9 and 18 minutes depending on the restoration and the frame rate. The color version was only discovered in the early 1990s, around the time I was peering through that telescope, and was in terrible disrepair.

By the 2010s, though, it had been restored, with occasional reliance on re-colored portions of the black-and-white frames as needed. A new soundtrack was also added, by the French electronica band Air, whose first and best album was fittingly entitled “Moon Safari” and contained catchy tracks like “Sexy Boy.” The colorized version recently made its way to Netflix, at about a 16 minute running time, making it the polar opposite of the other silent film I once discussed in depth here, D.W. Griffith’s “Intolerance.”

The imagination in “A Voyage to the Moon” is tremendous and all the more impressive for its speed, economy, and maximization of what we now regard as limited technical resources. The astronomy club at the beginning is arranged almost like a choir or an orchestra, with their telescopes resembling instruments and their conversations – unheard – like mini-songs against the Air score. Then there’s the loading of the bullet-like spaceship and its iconic impact on the moon’s anthropomorphized face – one of the earliest and most memorable usages of special effects in film.

While the ship and its landing make the earthlings seem as militant as they are described in Wells’ novel, the humans are much less aggressive on lunar surface that Cavor and Bedford were in “The First Men in the Moon.” They look up at the stars, which then segue into the planets in a nice piece of visual artistry. Eventually, they are brought before the militant Selenites (the film likely used a French translation of Wells as a major source of inspiration) but are able to escape because of their physical superiority – the Selenites explode when tossed.

By the end of the film, there’s a parade near a statue emblazoned with the Latin phrase for “works conquers all” and the word “science,” both nice correctives to the idea that people from long ago were ignorant individuals beholden only to religious faith or superstition. I like how both Méliès and Wells were fascinated not just with reaching the moon, but in returning to earth from it – which, if you remember, was a key part of John F. Kennedy’s proposal for sending a man to the moon and getting him safely back to earth. The roots of the Apollo missions, which required tremendous scientific investment as well as cultural capital built upon centuries of fascination with the moon, are here in these early 20th century pieces of art.

Highly recommended, both of them. “A Voyage to the Moon” can be watched in its entirety on a lunch break, and “The First Men in the Moon” is slim volume that you could probably make it through in a day or two.