I don’t have a long entry in me today since I spent most of my evening touching up a creative project that I ended up entitling “The Graduate.” I had originally posted a preview of it here as “The Gambler,” but adjusted the title so as to better reflect some of the themes of the story.

The story is about two individuals reflecting on a college graduation ceremony that they both attended. One has good memories of it, and more generally of her overall carefree attitude toward her college work, reflected in the fact that she never took any notes in her courses. The other person, a man, is more pensive about that same time, thinking about how so little had happened between his own graduation (further in the past) and the current graduation at hand. It’s sort of a fictional version of the non-fictional history I fleshed-out in an entry on here back in January.

I used some of the cut-and-paste and randomization that I have so far used in my other short stories. There are some snippets of poetry, plus an entire mid section that is a lecture that one person is listening to and not taking notes on. The mini sections near the photos, with the text “The notes:” are perhaps the notes that the more pensive of the two speakers (James) would have taken if he had been there (maybe he was there).

About the photos: I took them of my actual college notebooks from 2004 (you can see the date on one of them as 9/21/04 – my first month in college).  I’ve always liked using handwriting in my creative projects, such as for this poem I once wrote in iA Writer on a Mac and then transcribed by hand and filtered through several apps: 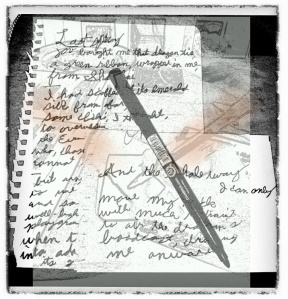 I like the idea of having a dialogue between typed text and written/pictorial text. I had a lot of fun when I used photos of a printed version of the middle section of my first ever short story, “The Loop,” as the actual middle section of the piece (i.e., I didn’t even type it into the Tumblr entry). It lets me put visual art and writing side by side.

With four stories now written, I’m going to do a fifth and then work on self-publishing them as a collection. So far I have enjoyed the no-pressure atmosphere of Tumblr, but I am in love with the idea of collecting them all in a physical volume that I can distribute or even sell.

Stylistically, I feel that I’m still feeling out my limits and preferences. I like the concept of recycling old text, notes, lyrics, and other textual scraps into something that sort of moves like a narrative. Perhaps I’ll settle into more linear narratives eventually but my love of poetry seems like it’ll always pull me back toward making some sort of hybrid.