“Space Quest 6” and the Internet as space vs. medium

One of the distinctive things about the Internet is that no one used to call it “the Internet.” Throughout much of the 1990s, the act of accessing an IP network (likely over dial-up) was referred to as “going online,” entering “cyberspace,” or encountering “the Net,” “Web,” or just “AOL.” Then there was my favorite: the Information Super Highway.

Networks and history
Computer-driven networks had been evolving for decades by the time that Geocities et al made them directly accessible to consumers. There wasn’t a monolithic, unified network in development that whole time, though; “the Internet,” in all of its broad meaning, was a latecomer to the networking, software and hardware party that had been going on since microprocessors were invented in the 1940s.

Speaking of the 40s: I saw Ethernet inventor Bob Metcalfe speak at a conference in D.C. last year, and he half-joked that the Internet began in 1946 with the first microprocessor, making it exactly as old as he was. This quip is instructive, since, on the one hand, it demonstrates how the numerous technological inventions that makes today’s Internet possible go back many years, and, on the other, it shows how all of these developments have been retroactively wrapped up in the homogenous terminology of the “Internet” (so we have “the history of the Internet,” or “pre-Internet” instead of “the history of networking technologies and capitalistic decision making” or “pre-chip.”)

Card-processing networks and travel reservation networks, for instance, were among the disparate networks that emerged throughout the 1970s, as Evgeny Morozov noted in a recent interview. The discursive convergence on the term “Internet” didn’t happen until much later, and was never inevitable. Infrastructure control had to be handed off to the private sector and specific technologies and protocol stacks (like Ethernet and TCP/IP) had to win out over others.

Medium vs space
These days, the Internet is seen primarily as a medium. One might “use” the Internet in the same way she might use a phone line, magazine, or TV. It serves as a means of getting information, e.g., it has literally become “the media,” in a happy coincidence of terminology. But one doesn’t really occupy it; in the popular imagination, there is no longer a spatial quality to it, and talking about “cyberspace” feels anachronistic.

This wasn’t always the case. There was “cyberspace,” sure, but there were also “chat rooms” (another spatial reference) as well as weird artifacts like Apple eWorld that tried to represent connectivity as a traditional community – with buildings corresponding to different tasks – rather than one giant medium (“the Internet”). Even early browsers like Mosaic and Netscape Navigator had names that were spatial, representing a physical collection of objects and a guide through a cyber-landscape, respectively.

None of these modes of connectivity were strange in the 1990s. My favorite example in this mold was the Sierra On-Line adventure game “Space Quest 6: The Spinal Frontier” (hereafter “SQ6”), released, crucially, in 1995, which was the year that Netscape really began to pick up steam and Windows 95 was released. It was also, if I recall correctly, the first year I actually went online.

Space and “Space Quest 6”
SQ6, like its predecessors and most of Sierra On-Line’s games, was a point-and-click adventure, a genre that involves investigating a world, clicking on things, accumulating inventory, talking to people, and solving puzzles. Generally, the gameplay is slow-paced and intellectual. I grew up with these games in the early 90s, installing them from floppy disks, being stumped for hours on puzzles, and then having to order a hint book since GameFAQs didn’t exist yet.

Many of them also had manuals that contained crucial, proprietary hints to puzzles, as a means of copy protection. “Space Quest V: The Next Mutation,” for instance, had a tabloid that included important tips. With SQ6, there was a pack-in magazine called “Popular Janitronics” that you absolutely had to have to complete one of the game’s hardest tasks (creating a homing beacon).

Unlike, say, “King Quest’s VI: Heir Today, Gone Tomorrow” (also from Sierra), SQ6 wasn’t on the technological cutting-edge, although I thought it was at the time since it was the first “Space Quest” game to be built for CD-ROM distribution (to get a sense of how big a deal this was: KQ6 was initially available on 12 floppies, and, after a year, on 1 CD). Its graphics were ok and its gameplay standard.

The game’s hero, Roger Wilco, goes to several exotic planets on his quest to save someone named Stellar Santiago. The most memorable sequence for me, though, is when he goes into cyberspace, which looks like this: 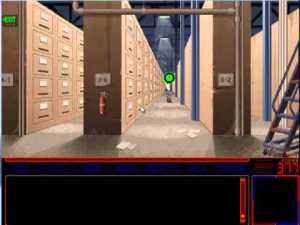 Software, networks, and hardware
These screenshots show how a lot of people in 1995 conceived of “the Internet” (which didn’t really have that label at this time; that noun with the definite article is found nowhere in the game’s dialogue or literature): vast spaces, dotted with highways that carried information and ran past virtual buildings that held online accounts and files. The file cabinet screen grab above is accessed through a menu that looks like a dead-ringer for Windows 3.1, which is itself housed inside a trailer. That’s about as cyberspace-in-early-1995 as you can get, and not far off from eWorld, albeit in a Windows-centric universe (I played the game on a Windows 95 machine).

While all of this may seem outdated now, it really isn’t. For starters, Roger goes online not by using a phone or even a PC, but by donning a VR headset that doesn’t look much different from Facebook’s Oculus Rift. Everything old is new again; recycling sci-fi and fictional ideas is both a fascinating aspect and a potential weakness of the tech industry, which has a strange reliance on the entertainment industry for ideas at times when its own poverty of imagination shows through. Plus, the idea of the Internet as a space was never “wrong,” it just lost out to the homogenization that eventually grouped disparate histories in hardware, software and networking infrastructure into one story, as Morozov pointed out:

“For most of the nineties, you still had a multiplicity of different visions, interpretations, anxieties and longings for this new world, and a lot of competing terms for it – virtual reality [note: weird how this one has survived and actually flourished in the discourse of wearable technology], hypertext, World Wide Web, Internet. At some point, the Internet as a medium overtook all of them and became the organizing metacategory, while the others dropped away. What would have changed if we had continued thinking about it as a space rather than as a medium? Questions like these are important. The Net isn’t a timeless, unproblematic category. I want to understand how it became an object of analysis that incorporates all these parallel histories: in hardware, software, state-supported infrastructures, privatization of infrastructures, and strips them of their political, economic and historical contexts to generate a typical origin story: there was an invention- Vint Cerf and DARPA – and it became this fascinating new force with a life of its own. Essentially, that’s our Internet discourse at present.”

He’s asking good questions, and I can’t wait for him to write more books on “the Internet” and its history. Since we’re talking about video games here, though, I might note, on the subject of “origin stories,” that this tendency toward a specific, linear history of “the Internet” – one that scrubs out various continuity errors or false starts – is a lot like something from a comic book or fictional universe, which makes sense. The tech industry at present has considerable overlap with geek culture, which has led it to elevate the Maker movement and the sort of artifact-obsessed outlook that loves clean origin stories rather than messy human dramas.

Wilco and conclusions
Roger Wilco never starred in another official SQ after 1995. Like the rest of Sierra’s adventure gaming franchises, which had thrived as PCs became mainstream in the 1980s and 1990s, it struggled to keep pace with new types of games that sported better graphics, more violence, and online gameplay. The solo, introverted experience of the point-and-click game was no match for attention spans with access to Unreal Tournament and, eventually, Facebook games.

With that transition in mind, it makes sense that SQ6 would see “the Internet” as a bunch of filing cabinets, or an “offline” version of Windows 3.1, for someone to dig through. The notion of the Internet as an actual medium for other people’s information, rather than a quiet library for each individual, implies a broad social connection that computers did not deliver in the mid 1990s and further back.

It’s too bad, in a way. If the Internet were conceived of a space today, think of the impact such a mindset might have on data collection and privacy – Wilco would have been overwhelmed had he stumbled across the “F” filing cabinet in that building, stuffed as it would be now with Facebook data. Or the “N” (NSA) or “U” (Uber) cabinets. Maybe it’s time to bring “cyberspace” back, if only as a semantic nod to there being real consequences for data collection and online screeds.