Reading Stephen King’s novel “Cell” 9 years after its release has been a revelation, with a host of interpretations that have neatly piled up over the last decade, like an archaeologist’s dream, and that just wouldn’t have been available had I read it immediately, back when I was in college. The first entry I wrote about this apocalyptic book – a much more palatable read than the Book of Revelation – focused on its vivid recreation of the world of pre-iPhone mobile phones, with snazzy color combinations and Crazy Frog ringtones, all of which seems like ancient history now that we have devices that come in a limited number of colors and with ringtones that almost no one bothers to change anymore. 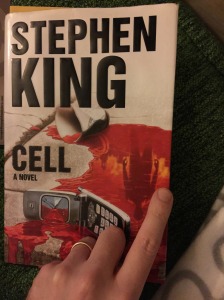 Beyond its snapshot of phones without Snapchat, “Cell” also offers an exasperated response to 9/11/01, set in a city – Boston – that would experience its own terrorist-led murders almost 12 years later. I like the description of the book’s main character feeling “dismal outrage,” albeit not at the murderous chaos around him, but at the destruction of his art portfolio filled with illustrations, as he thrusts it in between a stranger and someone trying to stab the man with a butcher knife. “Dismal outrage” is close to my feelings from September 11th, too, and the association is strengthened by a line a few pages earlier:

It’s not a plane, though, but an ice cream truck that starts the carnage. I thought of Marx’s quip about history repeating itself first as tragedy and then farce. “Cell” seems to skip the tragedy altogether and go straight for farce, replete with primitive mobile phones, portfolios chock-full of illustrations of sorcerers, and Boston ephemera like Boston Duck boats.

But it’s commentary on 9/11 is more extensive than just using the word “terrorism” (“If this was terrorism…”) and invoking a sense of disorder. There’s also hints at the dour post-9/11 world, the one in which cynicism is rampant and idealistic, altruistic people – whether working for “America” or “the greater good” or “the liberal arts” – are taken advantage of by heartless paymasters. The character who saves the man using his portfolio, for example, gets this string of thoughts about his destroyed drawings of mythical creatures:

“His own fantastic creatures, living in the cave of his imagination and poised to set him free from the drudgery of teaching art in a dozen rural Maine schools, driving thousands of miles a month and practically living out of his car.”

This recollection is an accurate picture of being an adjunct, although in my case substitute the car for the Chicago L. What a tightly packed passage overall, though: the idealism, taken to the logical (as it were) extreme of fantasy, of the character’s efforts, the exasperation at the devaluation of the humanities (and education), and the sudden borderline poverty existence even for educated persons. This is the post-9/11 America for millions.