“Get Scraped”: Understanding deadmau5 Through his First Album

deadmau5’s career has been a recurring topic on this blog. I was inspired to write one of my most successful posts ever, about authenticity in EDM, by deadmau5’s occasional orneriness on Twitter and the perception by some amateur DJs that the giant Canadian mouse head guy had lost his artistic integrity by confessing to the “just press play” ethos, whereby a DJ doesn’t mix live but instead uses prerecorded/sequenced material during a live set. I also used the album cover of “While (1 <2)” in a recent post about “greatness,” and deadmau5 is always close to mind when I write about criticism of EDM. 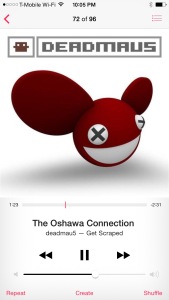 The cover from “Get Scraped.”

Albums and sets
When “While (1 < 2)” came out in mid-2014, deadmau5 called it his first real album. For sure, it had all the clichéd trappings of an album: crossfaded songs, recurring themes (he had six songs with names corresponding to the Latin words for the seven deadly sins; weird how he didn’t just do songs for all seven), and protracted moods. Plus, it was a double-disc/triple-LP affair – who has the patience for such a collection in the era of Spotify? It was like deadmau5 was doing a rock n’ roll opus.

A big part of what made “While (1 < 2)” memorable for me was how it seemed to filter the spontaneity of EDM – the experience of it – through the lens of art rock, creating something that seemed like EDM on the surface, but had a whole other layer of controlled pacing and experimentation beneath. There were splashes of piano, alt-rock guitars, and even a remixed Nine Inch Nails song. It was an album that basically begged to be reviewed, more so than something like his 2006 debut, “Get Scraped.”

The latter is unique in the deadmau5 catalog, since it seems to be neither a coherent album-like statement nor something that could pass as a mainstream DJ set (like 2008’s For Lack of a Better Name, for instance). Within the first three songs, it goes from an Oakenfold-esque track with radio call-in intro (“The Oshawa Connection”) to a 90s trance revival (“Intelstat”) to a vocoder’d-up acoustic number (“Careless”) which is reprised later with the redundant title of “Careless (Acoustic).” Then there’s “Unspecial Effects,” which has the strings and ominous keys of, say, the Requiem for a Dream soundtrack.

The album, such as it is, has no flow and plays more like a mixtape or an un-danceable DJ set. I mean, imagine going to a club that played “Waking Up From the American Dream,” with all of its sprightly keyboards. Looking back at “Get Scraped” and all of this randomness, it becomes clearer why deadmau5’s later work seems more significant. That is, he’s been trying more and more with each release to create something that pushes back against the free-flow, every listener for him/herself culture of EDM – seen well enough on “Get Scraped” – in which one person’s favorite song is another person’s song that that just gets a press of the “>>” or “next” button because it doesn’t suit the mood.

Albums and criticism
In a way, by going for increasingly coherent albums (“While (1 < 2)” is the peak of this direction) he’s reversing the overall trend toward the removal of the album as the central unit of music consumption. One could easily cut up and scrape up different bits of “Get Scraped” into a more listenable album than the original; not so much with “4×4=12” or “<album title goes here>.” I’m reminded of what music journalist Ned Raggett wrote in 1999, when compiling his list of 136 favorite albums of the decade:

“The album model is not set in stone, but a creation of the technologies and limitations available in the mid-century: how much you could fit on any one side of a vinyl slab, the attendant size of the product and need to create art or design works of that size, and so forth. As much as vinyl fetishists kicked against the compact disc dominance of the last two decades, CDs at least fit a familiar listening model still. The rise of this new model, which like every other musical medium will get increasingly cheaper and with wider access for both purchasing and actual creation of music, is a much different kettle of fish. Uniform ‘releases’ may become increasingly irrelevant when two different consumers judge the same batch of songs from an artist and select only those which please them, and therefore only keep those.”

He also has this great line, which I think sums up well why EDM has so far been a blind spot for critics still obsessed with the album form:

“If, say, live DJing was the backbone of the record industry, it would be the putative norm criticism would react to.”

Would it? I still maintain that DJing and live EDM are much more about experience than evaluation, meaning that criticism would be limited in its application. Still, deadmau5’s career arc seems to be toward cultivating a bigger reputation for himself by making bold album-like statements that cohere and flow. “Get Scraped” was the disorganized, MP3-playlist-like start that allowed for a gradual reversal, culminating in “While (1 < 2).” It’s like deadmau5’s career is an alternate history of what has happened to music over the past 15+ years. Rather than the chaos of going from a mainstream dominated by albums and criticism to one dominated by decentralized distribution channels and playlists, we got order.