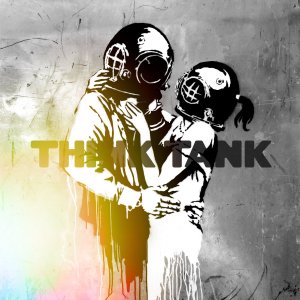 In America, the term “think tank” has connotations with the hard right. The words “conservative think tank ___” often preface a sobering news story about why it’s such a great idea to cut taxes on the 1% or keep the minimum wage well below $15 USD

I don’t know why Blur – not an American band, certainly – chose to entitle its 2003 collection of world music and nervous breakdown freak-outs Think Tank, but to this American, it has delicious irony. In track 0 (I’ll explain in a minute), guest Phil Daniels even says: “This is England, this ain’t America for fuck’s sake.”

The Iraq War had just started when Think Tank was released. Blur’s Damon Albarn had worked with Massive Attack’s Robert Del Naja and others to protest against UK involvement. The songs on Think Tank obviously predate the conflict, although they came to life in the geopolitcally tense years of 2001 and 2002, when Afghanistan was under siege and planning for Iraq was underway.

Blur also lost guitarist Graham Coxon during this time, and rather than replace him they continued on a trio. In light of the band’s growing directionlessness on 1999’s 13 and its forgettable “Music is my Radar” from 2000’s Best of Blur, though, the change was welcome. Blur could finally stop trying to be Pavement or the anti-Oasis.

Think Tank is nothing like the rest of Blur’s catalog. It has Moroccan instrumentation, sax all over the place, two of the longest songs the group ever recorded, and only minimal guitar. Nothing on it seems like a single, from a band that once released a whole box set of them.

I remember Think Tank as the last album that mattered to me as physical item, for two reasons. First, its artwork, done by Banksy, was a pleasure to hold and look it. Second, its U.S. CD version also had a pregap track – a song hidden before track 1, that could only be discovered by rewinding the CD from the very start. It took me 3 months to figure out it was there. We’ve lost a lot in the transition from LPs and CDs to MP3s and Spotify.

That track, “Me, White Noise” changes the entire album’s flow and message. Rather than start with the squelching “Ambulance,” the journey begins with some sneaky, not-quite-house rhythms and the surprisingly cynical commentary of Phil Daniels, who 9 years earlier had provided the classic narration on “Parklife,” one of Blur’s most memorable songs.

It’s one of the only Blur songs to contain profanity, and it’s stuffed with lyrical gems, including “so you look at the wall and what does the wall say? ‘i ain’t a mirror, fuck off!'” It slinks and snakes through almost 7 minutes, rising to an echoey, multitracked, frenetic chorus (“You’re boring!”), and then retreats into the opening squalor of “Ambulance,” only after Albarn has been reduced to ranting and Daniels to talking about how he’d use a gun if he could get one.

The rest of the songs aren’t nearly so aggressive, although “Crazy Beat” (the weakest number by far – almost an alternative take of “Song 2”) and the delightfully desertified “We’ve Got a File on You” stand out for their upfront mixes.  Most of the tunes are subdued, but their subtlety shouldn’t be mistaken for sameness. Blur touch upon African-influenced pop (“Caravan,” “Out of Time”), free jazz (“Jets”), funk (“Moroccan Peoples Revolutionary Bowls Club”), trip-hop (“On My Way to the Club”), and Primal Scream-esque tails (“Brothers & Sisters”). There’s also “Good Song” and “Sweet Song,” both of which live up to their titles by snaking through various chord and arrangement changes.

Overall, Think Tank feels like a dream of peace intermittently interrupted by flashes of nightmare, from the NSA/GCHQ paranoia of “We’ve Got a File on You” to the post-everything wasteland of “Me, White Noise.” Even the roughness of “Crazy Beat” and the haze of “Jets” show a creeping panic at the edges of the album.

By the time it all ends with Coxon’s lone contribution on “Battery in Your Leg,” you’ve probably forgotten that Blur made it through the previous 13 tracks without him. The song’s interplay of Fripp-like guitar textures and piano is quintessential 70s and as such in step with the album’s other Bowie/Eno/Clash touchpoints.

But it’s Think Tank’s awkward flow that endures. Its transitions from quiet to loud, from commercialism to introspection, and from one genre exercise to the next, is unified by its desert atmosphere and strange anxiety. That makes Think Tank quintessentially 00s and as good a representation as any of the the Iraq War’s impact beyond the battlefield and on culture.