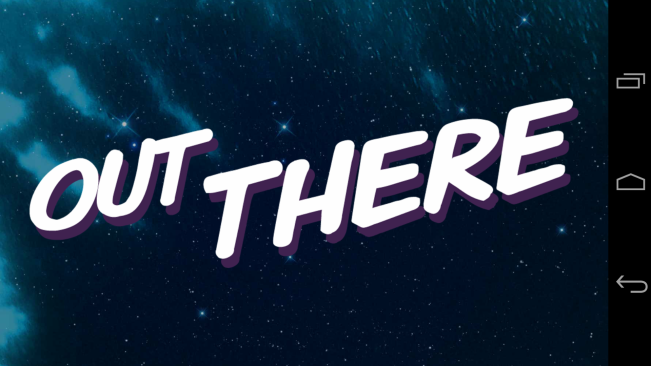 An honest Android game is hard to find. Most are “free,” except with in-app purchases. It’s like buying an apple “for free” at a supermarket and then paying $0.85 to eat it – what’s “free” about that? Free-to-play, free-to-eat, whatever – the mobile gaming world is full of cutthroat pirates obsessed with the word candy and unconcerned with your experience. Every now and then you get lucky with something like Plants vs. Zombies 2, only to see its makers experiment with pay-to-win lawn mowers.

What a weird feeling it is then when you find a game that doesn’t have any IAP – especially when it so easily could have implemented them to squeeze for you $50 here or there. The cross-platform Out There is at once a throwback to a different type of gaming business model and one hopes a foreshadowing of what’s possible for high-quality mobile games. It only costs $3.99, and despite its labeling in Google Play, there aren’t any IAP.

Out There is beautifully illustrated

Out There is exquisitely made. The graphics resemble a comic book, with lushly colored sci-fi landscapes. The soundtrack is creepy and beautiful, or basically what you would expect for a deep-space survival adventure. It’s the 22nd century and your character has awoken from cryogenic slumber (having fared better than Ted Williams, apparently) and has to make his way from one galaxy to the next.

Right from the start, Out There has that feeling of there being a long quest ahead, which I don’t always get from mobile games that seem not to look beyond what you’re going to do 5 minutes from now when you run out of rubies/coins/donuts. There’s a dot way across the galaxy and you’ve got to get there, overcoming all sorts of hazards and misfortune along the way. 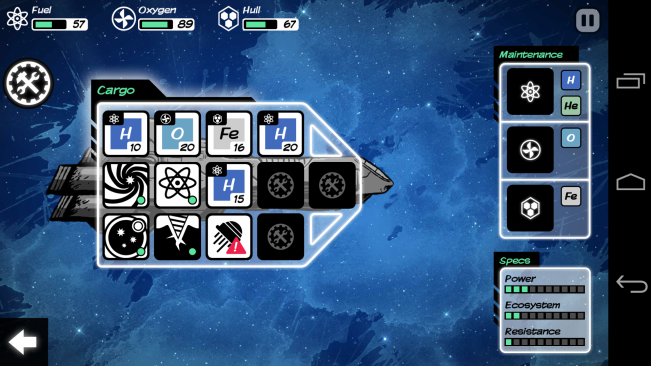 The ship interface in Out There

Your ship has several main resources – hull strength, fuel, and oxygen. Each one of these depletes as you travel from star system to star system. See what I mean about there being a golden opportunity for IAP here? But Out Here splendidly doesn’t take it. Instead, you can only acquire each element (H/He for fuel; O for oxygen; and Fe for hull and equipment repair) by harvesting them from stars and planets. How novel.

There’s a lot of risk/reward calculus in Out There. For example, you can drill into a planet’s surface to get iron and other metals, but doing so uses some fuel and carries the risk of breaking your drill, in which case you’ll have to use iron (what you were likely trying to acquire in the first place) to repair it. Your cargo hold is limited, with only a few slots and a cap of 20 units on each of the essential elements. It’s possible to dismantle equipment to make room and harvest elements, but doing so could leave you missing a module you’ll wish you had later on. 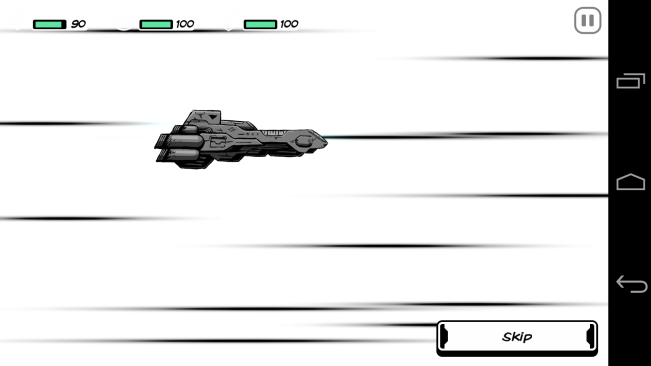 Traveling at the speed of light in Out There.

Traveling through the lonely cosmos of Out There is dangerous. In other words, prepare for a lot of game over’s. You might spin off course and take a bunch of hull damage, or your light speed warp between worlds may fail, leaving you short 20+ fuel and no further along in your quest. The game also has a choose-your-own-adventure element to it, in which you pick one branch on a path and never really know if a choice will net you a nice resource bonus or end your game prematurely.

Out There is exceedingly difficult and unpredictable, and you’ll need a lot of luck to get through it safely. But this isn’t Candy Crush luck – you won’t make it all the way to your destination without putting in some dedicated planning. 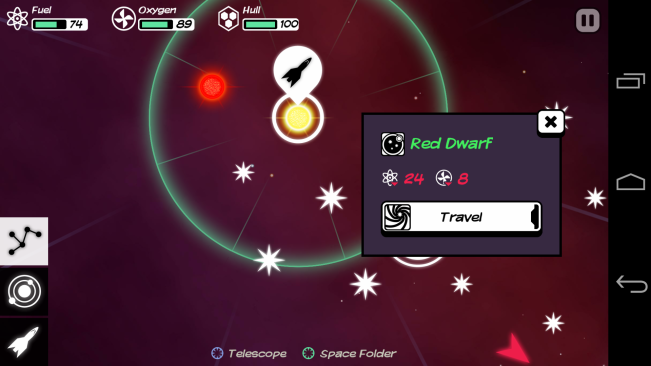 The Out There galaxy is huge

It reminds me of all the hours I logged as a kid playing Space Quest V: The Next Mutation, another tough trek (heh) that owed a lot to classic sci-fi and burnished its loopy puzzles with gorgeous artwork. Out There isn’t an adventure game per se, but its long-form, challenging characteristics make it feel like an adventurer gamer’s take on Faster Than Light or Mass Effect.