Whether you’re a Daydream-dreaming, widget-happy, launcher-prone power-user (who incidentally is unhealthily fond of hyphens and adverbs) or someone who just got a new Galaxy S4, there are plenty of popular, seemingly unescapable apps that you’ve likely firmly integrated into your routine. Google’s suite of Android apps, Facebook, WhatsApp, Zedge: these are the usual suspects. When I’ve made app recommendations in the past, I’ve often done so with an eye (in sky) toward apps either popular in Google Play or which cover essential smartphone functions.  Essentially, I’ve been a poster boy for Big Android, and so it’s time to be more “indie.”

For a change, I am going to focus here on five apps with relative small install bases (none more than 1M, most less than 50K) and which handle somewhat esoteric functionality. It’ll be hard to top Beautiful Widgets’ customizable Daydream in the latter regard…but let’s try:

I lamely joked about this app’s name in my previous entry. Essentially, Twilight puts a hazy red filter over your entire screen. It activates the filter at sundown and lifts it at sunset – so there is some loose vampiric quality to this APK, both in its modus operandi and its effect on your battery.

The sickly red filter (Instagram, take note) makes the screen allegedly more soothing to the eye, allowing you to sleep more easily since your eyes aren’t being hassled by bluer lights. It keeps a persistent notification in your task bar that can be used to pause the effect at any time. Convenient, free, on-and off vampiric cycles: sign me up, right?

Craigslist: a technology so old that it’s actually fast. Speed and simplicity have been Craigslist’s calling cards since the days of CRT monitors. It still looks like something out of 2001, but like similarly drab but speedy sites like Drudge Report, it works, as Jason Fried has persuasively argued.

Mokriya takes Craigslist and updates it for the brave new world of mobile screens and fancy fonts. The interface has smooth animations, a card-based system for posts, and easy response actions. You can also set up alerts so you’ll never miss the chance to bid first on a machine of snow doom again. 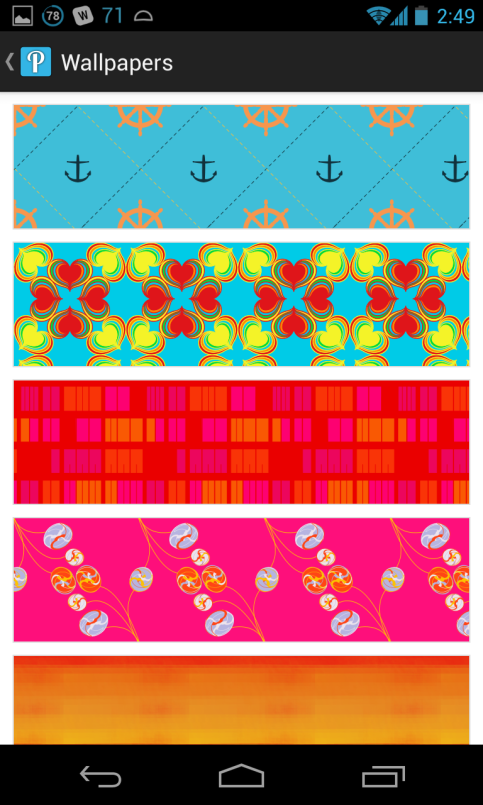 Pattrn brings the hipsterdom of Instagram (or Hipstamatic, even) to wallpapers. It has a big selection of patterned wallpapers, sort of like if Zedge had been taken over by Urban Outfitters. You can share wallpapers, save them to the Gallery, star them, or more importantly, dig into their hex values and perform searches for matching hexes. Hexy!

Idea: a service (likely illegal) that could post the same thing to SMS, Google+ Hangouts, and Snapchat simultaneously. Until that day, however, we’ll have to stick with slickly animated, Dashclock-compliant clients like Sliding Messaging Pro (SMP).

SMP does SMS with flair. Slide from one conversation to another or slide-out the left panel to see all contacts or the right one to start a new conversation/message. It’s customizable with different themes. It has some trouble with MMS right now, but in the age of Snapchat novels, who needs that?

Like the weirdo Friday app from Dexetra (which I’ll do an entire piece about one of these days), this tops the list of “Greatest Possibly Useless Apps.” A Play Store review of Friday once said “Cool app. I don’t know yet if it is a useless app or not but a like it,” which is basically how I feel about Notif Pro.

Notif Pro lets you create custom notifications on Android 4.1.+. It takes advantage of Android’s rich notifications, so you can make lists, add photos, or change the icon associated with it. A grocery list is a good use case, but personally, I love making reminders to make coffee, and then enriching them by adding a LinkedIn notification icon and a picture.