One Way Save Your Android Phone’s Battery: Use an Audi 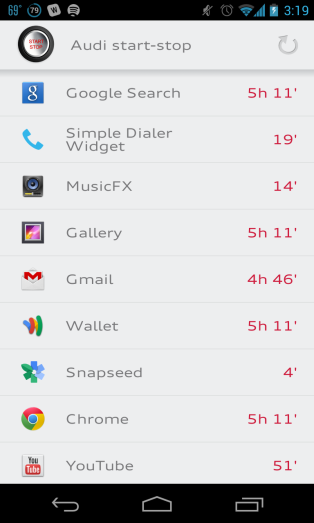 There are numerous clever hacks for saving battery on your Android phone. I’ve written about a few of them here. But I never expected that another one would come from Audi, of all sources.

The carmaker has released a new free app called Audi Start-Stop. It has a clever (and one could say skeuomorphic) button that, if pressed, initiates a task manager for your apps. It shows you exactly how long each app has been running, and it lets you kill apps, too. Additionally, it has a Super Save mode that suspends all app activity until pressed again.

The app has a few kinks – the app manager section is inconspicuously tucked away at the bottom of the screen, due in part to the oversized start/stop button. This can be seen as a case in which skeuomorphic design interferes with functionality, as it did in the old version of Apple’s glitchy Podcasts app for iOS (in which a giant reel-to-reel tape deck both ruined the metaphor and took up too much real estate).

But, this app is serious about saving battery, with the Super Save mode in particular being useful. Also, the marketing link between Audi’s automotive heritage and a single button that starts or stops your phone’s “engine” (so to say) is ingenious. Recommended.